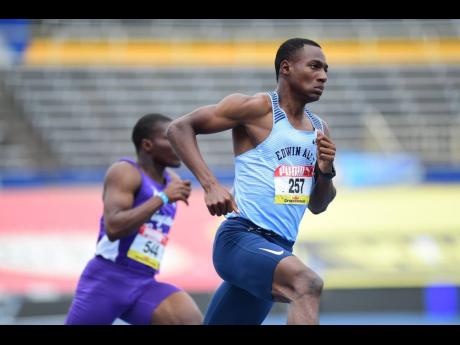 The quartet of Rosealee Gallimore, Abrena Wright, Camio Whyte and Rickiann Russell led the way with an impressive 3:38.12 minutes to win the Open mile relay, leaving in their wake, Edwin Allen in second in 3:42.62 with Holmwood B third in 3:50.09.

The performance by Holmwood was one of the fastest times ever recorded by a girls' quartet this early in the season and head coach Dave Anderson was ecstatic.

"I am not surprised with the performance of the team because the girls have been putting in some real hard work since September. I am especially pleased about the performance of Russell who has been doing wonderful at time trials and I expect her to do extremely well this season once she remains injury free," said Anderson.

He stated that they will not be carried away by the performance but will use it as a platform for the remainder of the season.

The Christiana-based Holmwood had three other relay successes, getting the better of Edwin Allen on all three occasions.

Edwin Allen, with their new-look Class I without Serena Cole, won in 46.11 seconds, ahead of Holmwood in 46.56.

Holmwood also had wins in individual events with Keira Meikle leading the way after clocking 13.77 seconds in the Class I girls' 100 metres hurdles as Santae Wilson of Edwin Allen, who did 14.03, ended second with Jerese Allwood of St Catherine High third in 14.17.

Among the boys, Edwin Allen's ace sprinter Brian Levell led the way in his first outing of the season.

In Class I, last year's third-placed finisher at Champs, Antonio Forbes, was best winning in 53.03 seconds, ahead of teammate Shamari Jennings who did 53.12 with Excelsior's Daniel Wright third in 53.68. In Class II, KC finished first and second as Jordan Taylor won in 55.27 seconds ahead of Taj Oneil Gordon who clocked 55.79.

Jamaica College (JC) had a good day in the field, especially in the long jumps. Euan Young won Class II with 6.36 metres ahead of teammate Jaidi James who leapt 6.30. In Class I, Uroy Ruan won with 7.11 metres.