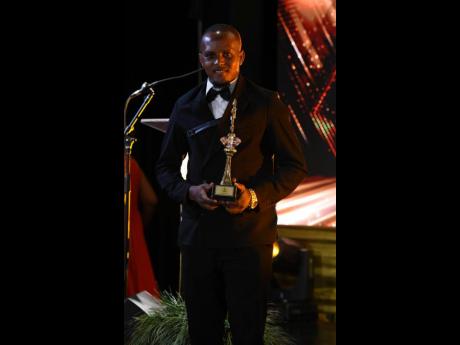 For Harbour View striker Nicholas Hamilton, being nominated for the RJRGLEANER People's Choice Performance of the Year category with the likes of five-time World Championships 100 metres winner Shelly-Ann Fraser-Pryce was victory enough. So to hear his name called as the winner was a surprise to him, but an honour that he has not taken for granted.

Hamilton took home the award at the RJRGLEANER Sportsman and Sportswoman of the Year Awards Ceremony, held on Friday night at The Jamaica Pegasus hotel, for his spectacular goal against Waterhouse in the Jamaica Premier League (JPL) semi-finals last summer.

Voted on by fans, the effort went up against the likes of Fraser-Pryce's 10.67 seconds performance to win her fifth World Championships 100 metres title and World Championships 200 metres winner Shericka Jackson's 21.45 record run, the second-fastest time in history over the distance.

Hamilton's goal and his contributions in the JPL play-offs last season were driving forces behind Habour View's fifth title win, and he said winning the award was not something that he even thought of.

"To be selected for the Performance of the Year is an unbelievable feeling. I didn't even think of winning this award. Just to be nominated for this award, I said that I already won just to be among the likes of Shelly-Ann Fraser-Pryce," Hamilton told STAR Sports. "But to actually win it is a good feeling."

Harbour View were last to qualify for the play-offs and rode a wave of momentum that made them the best on the island. After overseas spells in Canada and Scotland, Hamilton said that he owed the club and head coach Ludlow Bernard for the confidence to perform in critical moments.

"In the play-offs, you could say I came in personally (motivated). I have to thank Harbour View Football Club for giving me the platform to play in the Premier League, especially after I came back from overseas, and coach Bernard for believing in me to come out here and winning this title," Hamilton said. "To win this award is an unbelievable feeling."

His recent form got him an invitation to a two-day training session with national senior head coach Heimir Hallgrimsson, who Hamilton said he was impressed with. He is looking forward to playing his way into the national picture.