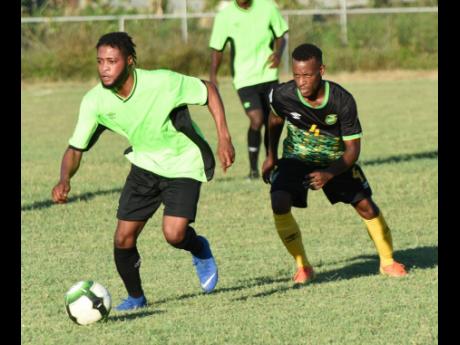 Former Cavalier attacker Chevone 'Messi' Marsh will be taking up a new challenge with USL club Chattanooga Red Wolves SC, after four years of playing in some of Central America's biggest leagues.

The 28-year-old believes the move is a new chapter in his career and a stepping stone to even greater things.

"I have signed a new deal with Chattanooga Red Wolves. I want to experience a new league and push my career to new levels. So I am overwhelmed to get this opportunity to showcase my skills on a different platform," he told STAR Sports.

According to Marsh, he received multiple offers to continue playing in Central America, but ultimately he chose the US, where he believes he will get greater exposure and better opportunities to make the step up to a higher level.

"I have been watching and assessing it for a while now. It's a new level, a new chapter. I always want to play at the highest level, competing against the best," Marsh said.

"So it is a great challenge for me to go out and showcase myself bigger and better because I have never put limit on where I want to play.

"I always try to set targets and consistency is all that matters in the game. So I am eyeing double figures (goals) because I am right under the nose of the MLS teams and I need to get into the MLS. I need to force my way back to Europe.

"If I can hit the heights of double figures (goals) as an attacking midfielder or winger, then people will have to look. So the mindset is to work and do my ultimate best. Anything else is unacceptable," he stated.

Marsh goes into Chattanooga Red Wolves with high expectations and he is looking to deliver big performances, which he hopes will catch the eyes of the new national coach, Heimir Hallgrimsson.

"There is a new coach with the national team and I am trying to get back in, and I know they are watching. So it is for me to find back myself real fast," Marsh said.

"At the club, they all have high expectations of me. I think I have a big role to play based on my conversation with the coach.

"Once I am doing my best, scoring goals and assisting, there is always a place. I believe in myself, my ability and with the support of my family, friends and the Almighty, who have stood behind me throughout my career, I believe in 2023 there is a new level to unlock," he said.

Last week Chattanooga Red Wolves announced on Twitter that they were pleased to sign a two-year deal with the Jamaican.