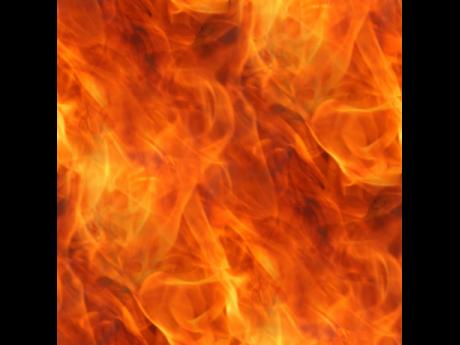 A St Andrew senior suffered a gruesome death in her Constant Spring home on Monday after it was set ablaze by gunmen believed to be settling a score with one of her relatives.

The police say that the elderly woman, Hyacinth Whyte, 87, was inside her dwelling about 9:50 a.m. when men drove up in a motor vehicle and opened gunfire at the house before setting it ablaze. Whyte was found in the rubble by police and personnel from the York Park Fire Department. Head of the St Andrew North Police Division, Superintendent Sherika Service, told THE STAR that the police were already following a lead that they believe will help to seal the investigation.

"Information received is that she was related to the person that was the intended target, but it is stemming from an incident that occurred from last year in another parish. It turned out that the suspects wanted to take their revenge now. At least what we know now is that the incident is arising from something domestic, we've not linked it to any gang feud," she said.

Service added that her officers were saddened as they transported the elderly woman.

"I did not get to see her but based on what was reported to me, her hands and parts of her body were burnt. I was told that as the police officers were taking her to hospital, it's as if her skin was coming off. She was unresponsive from the moment the police reached the premises. The suspects who carried out this act don't live in this area. We do have a lead and it has taken us outside the parish, so our investigators are actively trying to find the persons in the matter to further the investigations," Service said.