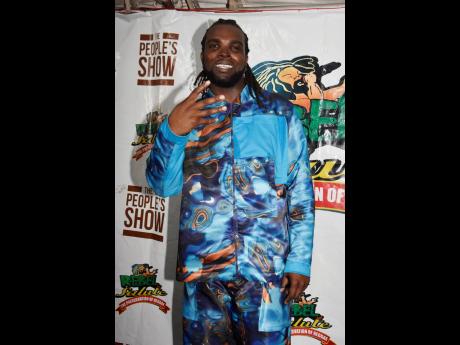 Yaksta at night one of Rebel Salute in St Ann.

Recording artiste Yaksta has been championing sustainable investment in farming.

As a crop and cattle farmer, prior to receiving a major breakthrough in the reggae and dancehall space, the St Mary-born star said that he has been reaping the benefits of what he sows. But within the past year, has suffered a loss.

"Won't tell no lie, we take a dip," Yaksta said in an interview with THE STAR. "I lost the first farm ... the lease was only for one year."

Yaksta first made an impact with the hit single Ambition, where he emphasised 'farming over flossing' and continued with the same energy and message in Assets (Fowl Coop). The artiste had expectations to continue growing his investment on the original farmland he obtained but declined to speak on the reasons the lease was not renewed.

Yaksta also rejected any claim that his latest investment in his music career had anything to do with the farm being neglected.

He said "I think people saw potential greatness of the farm and ... so me lose it. Let's not get into those details." Being the optimistic person he is, Yaksta shared that greater is in store.

"We are in the rehabilitation stage. I had to find another place. I sought other land, so me moving into some other parts of St Mary but I can't say too much until the closure is handled. Just expect great things from the farm when it's back up," the artiste said.

He imparted that loss is part of winning and also noted that in every investment, there is a chance that you will lose.

"I think if a person is going to invest in anything, invest in the lucrative things that not only give short-term, but also long-term returns. Also, make sure a lawyer is present, right beside you to read the fine print, and you can't invest without some type of insurance," Yaksta shared.

Referring to the probe being launched into Stocks and Securities Limited (SSL) following millions of dollars reportedly missing from an account belonging to track legend Usain Bolt, the artiste said it is unfortunate, but he believes a lot of persons are speaking out of ignorance.

"People are being robbed blind every day and the Government nah do nothing to help. Who not talking ignorantly, are being sarcastic about the situation because even the very money in your savings, the bank takes a percentage out of it every chance it gets, and you risk losing it. It's just another potential dollar bill the financial institution can use. I don't know how they managed to take all of Bolt's money, but I'd want him to get back him money. We can't have an ambassador, and a ghetto youth that rise up from working so hard to be robbed like that," Yaksta said.

"The solution might just be to have no money and be a pauper because a pauper already know what it is to be broke. On a serious note, anybody that is going to invest, approach it with optimal optimism. But be very wary of the Ponzi and pyramid schemes. Don't just trust a person because they are of a certain calibre," he continued.

Yaksta recently performed on night one of Rebel Salute and is gearing up for the release of his album in February as part of the Reggae Month celebrations.