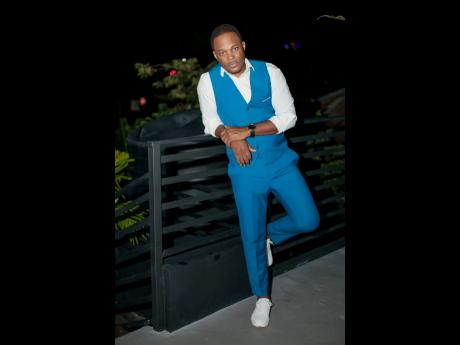 At the beginning of the 2000s, singer Khristopher emerged on the music scene with the single I Want it That Way, a cover of the Backstreet Boys hit, which he recorded for producer Louis 'Flabba' Malcolm's 'Headache' rhythm.

Months later, he scored another hit with his rendition of All I Have to Give, another Backstreet Boys hit, which was featured on Malcolm's 'Hurricane' rhythm.

Originally from Trelawny and now residing in Portmore, St Catherine, Khristopher took some time from the music to recharge and realign himself with different goals that he wanted to achieve. Now back with his continued passion for music, Khristopher is upbeat about his latest single Friends, a song that tackles friendship and camaraderie.

"The motivation behind recording a song about friends and friendships came about because far too many times I've seen and heard of friends bringing down friends. Friends disappointing friends, friends not being there the way they should as a friend. Me myself [I] have also been a victim of these types of friends, the ones who will help to build you but will also try to break you down. The ones who were good with you when you're struggling, but as soon as you start seeing better days, things mysteriously change. Not all friends are like that though," Khristopher explained. He also opined that loyalty and respect are the necessary ingredients to foster lasting friendships. Khristopher explained his absence from the local music scene.

"I've really been working behind the scenes recording and learning the business aspect of this music industry. Also doing gigs in the New York area with a band called Rhythm Master from the Bronx to really strengthen my stage craft and keeping my vocals alive and well," he stated. Though he is yet to release a body of work, Khristopher decided to release singles to rekindle the connection with music lovers.

"I've actually recorded enough songs for an album but decided to release singles instead. I will get to the album at a later date. The fact that I've been off the music scene for so long, I would rather slowly make myself present again with singles that I can promote to the fullest. I believe promoting one song at a time is best," he disclosed.